Watts, Volts, Amperes, Ampere hours and Watt hours - what does it all mean?

When planning your off-grid Solar Power system it helps to understand the numbers and terminology. This post explains in simple terms the meaning of these and how they relate to each other. 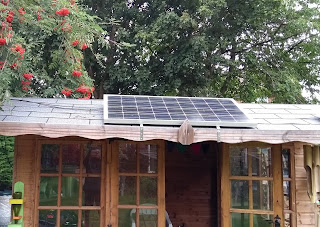 Volts - The higher the voltage the less current is required to power an appliance. Most batteries used for solar systems start off at 12 V. If you put 2 together in series you get 24 V. When powering an appliance rated at 300 Watts this will reduce the current from 25 Amps to 12.5 Amps. This in turn will reduce power wasted in the cabling and also allow the use of thinner cables.

Amperes - Higher powered appliances take more current which is measured in Amperes. This is often shorted to Amps. The higher the current the faster the battery discharges. Here are some examples when using a 12 V battery.

Amp hours - This is often shortened to Ah. This is used to show the capacity of a battery. So a battery rated as 100 Ah is capable of supplying 1 Amp for 100 hours or 2 Amps for 50 hours. (in practice its best to only use 50% of a battery to avoid shortening its life).

To increase battery capacity, many batteries can be connected in parallel. eg 5 batteries of 100 Ah capacity in parallel will give a capacity of 500 Ah.

Note: Two batteries can be connected in series to create a 24 V circuit

Two 12 V batteries in series will give a 24 V system with 100 Ah capacity resulting in a total energy of 2400 Watt hours.

Earlier we showed how long a TV could be used for using a 100 Ah battery. This was worked out dividing 600 (Watt hours) by 40 Watts (the power taken by the TV) which gives 15 hours.

We need to power 2 x 10 Watt LED lights fitted with motion detectors. Total power is 20 Watts. A 12 V battery of 20 Ah capacity will have a total energy of 240 Watt hours. Assuming that we use 50% of the capacity (120 Watt hours) this battery will power the 2 lamps for a total of 6 hours continuously.

As the lamps are only occasionally triggered we can estimate that they are on for a total of 30 minutes each night giving us 12 days of operation without any sunshine. If we use a 20 Watt solar panel and assume that in winter it produces 10 Watts over 4 hours every day then over 3 days it should fully charge the battery.

So a 20 Watt solar panel and a 20 Ah battery should give us a reliable Solar Power system to provide half an hour of lighting in the shed at the bottom of the garden.

We need to power LED lights and TV at holiday home for the weekend as well charging the phones. All the lights have a total power of 30 Watts and need to be on for 5 hours every day. The TV (40 Watts) is used for 3 hours a day. The power required to charge phones is negligible.

As the property is not occupied during the week, only a small solar panel is required to charge up the battery - ready for the next weekend.

This post presents a basic guide to the terminology used when planning a stand alone Solar Power system.